The tweens and teens of the Hurston & Hughes Literary Circle™ had a step back in time with the books that were recently discussed.

One Crazy Summer by Rita Williams-Garcia introduces us to Delphine, Vonetta, and Fern (AKA, Afua) during the culturally shifting  year of 1968. They flew from Brooklyn to Oakland to spend the summer of 1968 with a mother they did not know. Delphine was 11, Vonetta 9, and Fern, 7. Each girl grew and discovered something new about herself against the backdrop of the warm California sunshine, a difference in regional styles, the Black Panther Party and the rise of black pride, freedom schools, and a breakfast and lunch program that filled in the meals when they were not at “Mean Lady Ming’s” getting Chinese food. This is at once a nostalgic trip back for those of us alive back then (I was only four) and remember afros, double dutch, black pride, and the wonder of this post-Civil Rights Movement Era.

The modern era is listed as 1968-2016, the years after Dr. King’s assassination and after the 1970s rapid acceleration of blacks into government, public and private sector jobs, out of segregated communities, and into integrated spaces with the white population. This book is a glimpse at all that was hoped for and promised during that hear that was met with protests on the Vietnam War, the murders of young activists in Oakland and California, the rise of women’s (white) rights, and the continued conversation on black people in the United States.

There were funny conversations among the H&H generation, all born after 2000, about references that they knew nothing about, like walking right into the airport without being screened or using a payphone to make a cross-country call. Some even wondered about the cultural and generational act of having one’s grandmother living with the family.

This tender story is perfect for summer reading. It examines sisters’ relationships with each other, explores the complications of a woman’s desire for something more than motherhood and the children she leaves behind, and lastly, the shifting societal norms that ushered in a modern generation. When read together with P.S., Be Eleven and Gone Crazy in Alabama, we get a family story of the Gaither sisters and the people that help make them who they area.

The Rock and The River by Kekla Magoon is also set in 1968, in Chicago, and told from the perspective of a thirteen  year old boy. This is a complimentary read to One Crazy Summer in that is shows that the months following the assassination of Dr. Martin Luther King, Jr., had reverberating effects on urban areas throughout the United States.

Sam and Steven are the teenaged sons of a noted civil rights leader and activist in the large metropolitan, still-segregated, highly immigrant heritage city along Lake Michigan. Location seems to be central to this story as well as in One Crazy Summer. Chicago politics are replete in the tale as well as those “it only happens in the south” events that remind the reader that race, prejucide, class, place, and belonging are universal stories.

The perspective of the young man against his father’s wishes for his presence to be at his endless rallies, the young man wanting to forge a new path, the older brother’s willingness to stop turning-the-other-check are set in the backdrop of this story that is at once a coming-of-age of not only the protagonist, but of the city after segregation is declared to be unequal.

The young readers had conversations about sociological literature, protest literature, as well as realism, historical novels, and what they did and did not like about the novels.

Next week, we gather at the St. Louis City Library Location on South Grand. We are reading Roll of Thunder, Hear My Cry by Mildred Taylor. This book is celebrating her 40th anniversary and is what propeled budding novelists like then thirteen year old Jacqueline Woodson, to see herself in the story and become a writer.

Interested in joining? There is still room at the table. The schedule and reading list for the upcoming sessions are as follows:

July 5th, 4-6pm, Chains by Laurie Halse Anderson, The Slider House, Manchester Avenue, Rock Hill. This is one of the last snack opportunities, $10 is the estimated cost

July 12th, 4-6pm, Required Reading for Middle or High School, Picassos, Beale Street, St. Charles, (just off I-70 West and 5th Street Exit, new Beale Street shopping area). Each participant needs to check with their 2016-17 school for the required list. They will be reading and/or writing for those first-day-of-school assignments. If there isn’t an assignment, they will be asked to choose a book to write a summary. Another snack opportunity estimated at $10 While we are at the coffee house, there is a chocolate store and ice cream store along the walk.

July 26th, 4-6pm, Selected Poems from Treasure Shields Redmond and Cheeraz Gorman, copies will be provided ahead of time. These poets will be featured guests. Tentatively scheduled to be at the Ferguson Youth Initiative. If this is a location issue for the majority of the readers, an alternative location will be researched.  This is the last H&H for the hear so readers will be asked to share anything they want to write on a book they read or a poem they wrote. They are welcome to bring a friend.

The 2017 Summer will be June 6th-July 25th, 4-6pm. Reading list and locations will be determined throughout the remainder of 2016 and into 2017 depending on what is published in middle reader and  youth/teen fiction featuring AfroDiasorian protagonists. 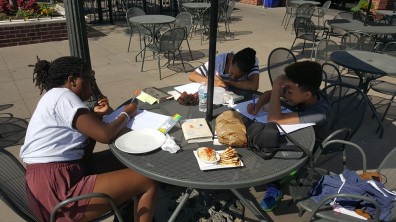